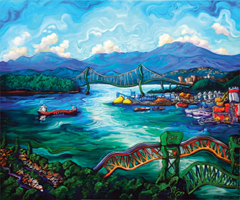 When I was house hunting in Vancouver a few years ago I had one spectacularly ridiculous condition. If I was going to buy a 33’ x 122’ footprint the deciding factor was going to be, obviously, “location, location, location,” but location didn’t mean proximity to a school or Starbucks, nor did it mean neighbourhood demographics, alleyway traffic or oil tanks hidden deep in the back yard.

My condition was that I wanted to live within the panoramic view Ethel Wilson described in the first paragraph of her classic 1954 novel, Swamp Angel. And I was more or less serious, too.

I remember being met by an affably patronising smile in the rear-view mirror when I asked the realtor, who was driving us east along Dundas through Vancouver Heights to the next house, if she knew whether it was close to where Wilson’s novel opens. It’s not the kind of question you should ask a highly-caffeinated Vancouver real-estate agent. She knew Capitol Hill was east of the Heights but she hadn’t heard of Wilson. I didn’t bother telling her that I really did want to find a place that was inside the visual prospect a writer she hadn’t heard of described in a book, or that it was the most evocative—and perfect—opening in any BC novel I’d ever read.

It’s late afternoon and Maggie Vardoe, Wilson’s unsatisfied housewife protagonist, is about to walk out her back door, up the alley and into a waiting cab that will drive her away from a sterile marriage and towards a new life as a cook at an Interior fishing lodge. She’s standing alone at the living room window in her Capitol Hill home, doing what many people with pleasant views probably do when they’re standing alone at a window and not talking on the phone: she looks out, surveys the panorama, and thinks.

Ten twenty fifty brown birds flew past the window and then a few stragglers, out of sight. A fringe of Mrs. Vardoe’s mind flew after them … and then was drawn back into the close fabric of her preoccupations. She looked out … over the roofs of these houses to Burrard Inlet far below, to the dark green promontory of Stanley Park, to the elegant curve of the Lions Gate Bridge which springs from the Park to the northern shore which is the base of the mountains; and to the mountains.

Maggie, an outwardly uncomplicated Burnaby wife, just stands there and looks, but she’s canvassing the scenery like an artist would first survey a landscape. Then she has one of those moments when the ordinary objects we see in familiar environments appear ever so slightly unfamiliar and induce unordinary perceptions:
The mountains seemed, in this light, to rear themselves straight up from the shores of Burrard Inlet until they formed an escarpment along the whole length of the northern sky. The escarpment looked solid at times, but certain lights disclosed slope behind slope, hill beyond hill, giving an impression of the mountains which was fluid, not solid.

I can’t help but think that the annual fiction prize in BC is named after Wilson because of stylistically crisp and lucid sentences like these. Her writing, vivid and unpretentious as it always is, has this graceful quality of marvel and surprise embedded in the surface of simple descriptions.

It’s also the kind of writing that made me think, yeah, it would be kind of neat if my future mortgage payments could be directed to a part of the city a fictional character was looking at. I liked how Maggie surveyed the panorama, moving her eyes along the topography from one point to the next and then hitting that wall of mountain but not quite stopping there. This way of looking at the city always seemed archetypal to me. Like an Impressionist painter who knows that objects in a landscape can’t be represented accurately without considering the play of light and atmospheric conditions that enable us to see those objects in the first place, Maggie is looking at her environment with distinctly Van-couver eyes.

Looking out windows, whether in a novel or in a living room, is quite a normal activity in a visually stunning city that has a cultural fetish for voyeurism. Where else in the world does the real-estate industry, just like local literature and art, dwell on the value—both real and imagined—of points of view?

There are extraordinary views in Vancouver—most of them natural, some built, many hybrids—and we do like to look. We have what Lance Berelowitz, urban planner and author of the 2010 Olympic Winter Games Bid Book, calls a “cult of view.” Think of the official “view cones” city hall enshrined with their “view protection measures” to defend “view corridors” of the skyline, the North Shore and the surrounding waters from vertically-obsessed developers. Or the inspired images and text city officials issue—“Vancouver’s ‘greenness’ is overarching. It is a key to our collective identity. Vancouver citizens live in a green paradise,” reads Vancouver’s Green Capital brand promotion—to inculcate a sublime sense of civic optics.

I certainly bought into the cult of the Vancouver trompe-l’œil—metaphorically but also financially—even though only three of the city’s twenty-seven designated “view cones” are in East Van—Main Street, Commercial Drive, Trout Lake—and none of them protect what I see when I look up from this screen and out the window of my Hastings Sunrise home and survey pretty much the same panorama Maggie does in Wilson’s novel.

In no other city does the literature, even the creative literature produced by civic officials and realtors, fixate on the natural and urban geography as in Vancouver. Pauline Johnson’s mythical Lion’s Peaks, Douglas Coupland’s City of Glass, Zsuzsi Gartner’s perpetually beckoning City of Land and Sea, Malcolm Lowry’s contemptuous mountains gazing down on infernal Hastings Street, SKY Lee’s historically pungent Chinatown.

And Wilson’s Capitol Hill, which I think is the most ample point of view from which to look at Vancouver precisely because it is not one of the more clichéd vantage points—southern, northern, western—from which the city tends to be depicted. Close enough to downtown but a bit of an innocuous and remote asymmetrical mound of sandstone in North Burnaby, Capitol Hill is bisected with working and middle class residential streets, enclosed at its base by East Hastings, a city park and a sprawling refinery. It’s entirely average, except for its comprehensive view.

In Wilson’s short story “A Drink with Adolphus,” Mrs. Gormley tells her daughter that she needs to get to Capitol Hill by taxi to visit her friend. “To see the view. The house is old but he’s mad about the view on Capitol Hill.” And in “The Window,” a character, Mr. Willy, has a window on the northwest wall of his home that looks out over the water and mountains, just like Maggie does in Swamp Angel. The view is nice, but Wilson says the mountains are “deceptive in their innocency, full of crags and crevasses and arêtes and dangers.”

In literature as in life things are never exactly what they appear to be. I’ve looked out my window thousands of times since I moved into Wilson’s literary panorama. It never really changes—in shape and the throb of its volume—but like an optical illusion where a static object looks to be in motion the scene always is different, and I’m not just talking about the giant wind turbine that somebody stuck up on Grouse Mountain.

I imagine that when creative types look at a landscape they see those shifts all the time. BC’s beloved Emily Carr, who spent an awful lot of time staring at trees and mountains and then painting them, said that when she looked she saw “there was a coming and going among trees, that there was sunlight in shadows.” As for Wilson, she was a painterly writer with a talent for wrapping her words around the rippling facade in scenery. In a talk she once gave to the BC Society of Artists, she mentioned taking lessons from Carr at her Granville Street studio early in the last century.

Reality, whether it’s in a novel or framed by your window, involves empirical objects like trees and mountains but these objects in their composition often express something ethereal, like those vibrations and mysterious undercurrents pulsating just beneath the surface. What Maggie sees is a defamiliarised inventory of Vancouver landmarks that are familiar to anybody who lives here.

The crows that gather every late afternoon and commute in those swirly, undulating diagonal sky paths from across the Lower Mainland to roost in that unlikely forest by Willingdon Avenue. The massive thumbprint of Stanley Park. The harbour. Lions Gate and the ubiquitous North Shore where those mountains really do look like a flat green-black stage background until your eyes register colour and depth. Consider the variations in that light and its textured effect on the landscape, and then slowly notice the range of gradations and the separate hills that give the backdrop depth and dimension and make it look “fluid.”

Maggie isn’t looking at a static high-res image. The focal point that dominates the panorama—the punctum that “pierces the viewer” like the French theorist Roland Barthes calls it—is not one object in the inert landscape but the light and its fluid effect on the land. Like any Vancouverite who looks north, her eyes just stop at that 100-million-year-old granite and metamorphic rock of the Coastal Mountains, which at first look like a wall with height and width but then take on a third dimension, with a background that recedes farther and farther back. That optical phenomenon is probably the closest thing Vancouver has to an official way of seeing, which has less to do with passively apprehending the reality we see “out there” and more to do with our desire to give that reality a sense of meaning, structure and purpose by styling it as a fictional entity. »