Beat Me: My Search for the Spirituality of Self-Harm 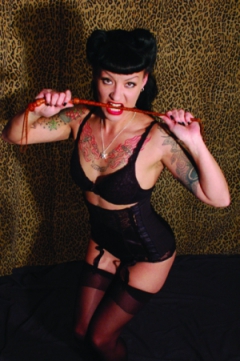 Does the use of pain reflect a love of endorphins, a deeper experience, or a psychological imbalance?

I’m a babbling, weeping emotional wreck. My ass is as black as an overripe plum and hard as a pit from all the accumulated swelling in the tissues. I can’t sit and can barely wipe after going to the bathroom.

But I dismiss him, instead. “You don’t know what you’re talking about. You haven’t been to that place.” It’s important that I feel tougher than him.

I’ve been known to seek out similar experiences, although it has more to do with control than anything else. Masochists like me are characterised by our controlling natures. We control our relationships and gain what we seek from our pain giver. Modern medical research shows us that masochistic practices cause some big changes in human physiology, namely in levels of hormones, in brain waves, in attention and consciousness. For centuries mystics have used physical and sexual stress to boost endorphins and engender visionary experience. In some cases, a mystic’s ability to endure pain while in trance serves as proof of his or her spirituality.

The night I was flogged, women walked around the club with their breasts exposed, nipples bound with string, and men walked with their cocks in leather swinging back and forth. I wore a Chinese red silk dress. I didn’t want the fabric damaged, so I asked my boyfriend if he wouldn’t mind me taking my clothes off. I undid the snaps that ran from my neck down to my chest and then opened the zipper at the side. He pulled the fabric from my body, peeling me. Standing there in my bra and corset and girdle I felt tight: tight in my body, restrained and safe.

Lights illuminated the stage. People milled in line. When my turn came I climbed the steps toward a large man with a handlebar moustache. He wore no shirt and had a beer belly over his blue jeans. I was told later that, besides being a flogger, he runs a workshop where he teaches people how to do take-downs, kidnap someone from a public place—with their permission, of course—throw them into a van, hold them hostage, and even how to coordinate the personnel necessary to orchestrate such an act.

I told him that, except at home, with household objects like leather belts and wooden kitchen utensils, I had never really done this kind of thing before. “I … I like it kind of hard,” I said, reddening without knowing why, and then told him about my boyfriend’s thick leather belt, including where on my ass and thighs I liked him to hit me.

The journey he took me on challenges simple expression. A sense, like low music in the orchestra pit; it swells like sound and grows bigger. It crescendos and crashes and crescendos again into something bigger. Waves and waves, like being lost, like being out of time, like being struck by the high notes of flutes and then by the deeper reverberation of an oboe.

As young child, a girlfriend of mine read about a nun who had made a sacred vow never to allow her body to rest against the back of a chair. In pious imitation my friend followed her example and spent years sitting crookedly. Ascetics who subscribe to the psychology of self-inflicted pain value the suffering they wreak on themselves. Georgetown University professor Ariel Glucklich has explored the terrain of meaningful spiritual suffering in Sacred Pain. He examines the ways in which pain has been used to heal the human spirit: as a punishment for sin, a cure for disease, a weapon against the body and its desires, and a means by which the ego may be transcended.

The piercings performed during the Plains Indians’ Sundance is one of the better known and documented examples of religious masochism. Others include the practices of fire-walking Hindu yogis, Christian flagellants, Muslim Shi’ite self-injury, and body scarification among African tribal religions. There is also Buddhist lore on Zen students achieving enlightenment after being injured by their masters. All of them value pain as important to religious experience.

The fifth century Arab Christian saint Simeon the Stylite is said to have tortured himself to death for love of pain. He subjected his body to ever-increasing austerities from an early age, and on one occasion was discovered unconscious, his waist bound so tightly with a girdle made of palm fronds that days of soaking were required to remove the fibres from the wound.

He later took to standing continually upright as long as his limbs would sustain him, a practice still employed by some sadhus—Hindu ascetics—in India who stand 24 hours a day and sleep with their heads resting on a vertical pole. In order to get away from all the people who came to him for prayers, Simeon found a pillar amongst some ruins and formed a small platform at the top. In 1776, Edward Gibbon in History of the Decline and Fall of the Roman Empire describes Simeon asceticism this way:

He sometimes prayed in an erect attitude, with his outstretched arms in the figure of a cross, but his most familiar practice was that of bending his meagre skeleton from the forehead to the feet; and a curious spectator, after numbering twelve hundred and forty- four repetitions, at length desisted from the endless account. The progress of an ulcer in his thigh might shorten, but it could not disturb, this celestial life; and the patient Hermit expired, without descending from his column.

I imagine that it must have been a sensation like sunshine, like summer in your skin, long and lazy as a brushstroke.

The man who flogs me on stage stops. Gently touches my shoulder blade with his finger.

“Can you feel that?” he asks, whispering in my ear.

Satisfied I‘m not on the verge of passing out, he continues to whip me.

Later my girlfriend told me that she approached the stage and watched me closely. She said I hadn’t even flinched.

I experience flogging—either from a professional or by my boyfriend’s belt—as sensation, not pain. I open my mind and tear down all its fixed ideas. It’s about liberation: not words, not notions, just the sensation of leather on flesh.

When it was over, I put my arm around the flogger’s neck and said, “You’re really good.” I walked off the stage. I had snapped back into myself.

Another value in pain is relief of guilt, or pre-emptive payment for sins done wrong. Some psychoanalysts, including Freud, share a similar perspective towards self-harm. This is often the primary motive of Christian saints and martyrs.

So punishing the physical body is a way a person can “pay” for sins committed in life, serving to both relieve guilt and anxiety towards the justice they believe they will encounter after death. To believers, this has an obvious psychological benefit.

The real danger is that some people who practice self-harm have misplaced anger and pain that they are trying to resolve in destructive ways. Instead of confronting their emotional pain they bring themselves physical pain as a relief from stress. The relief is usually short-lived and the need for self-destruction quickly returns.

As a kid, I’d pinch my skin or punch myself in the head; I’d carve my arms with a math compass and feel calm at the sight of the pomegranate seed drops of my blood. I’d starve myself and say “I’m strong” or “I’m bad.” Looking back, I realize it was slightly pathological.

Denying yourself ice cream when you’re ten probably has little spiritual value -- nor is carving bad tattoos into your skin redemptive, especially if they look like Tasmanian Devils.

Carl Jung differentiates between these pathological neuroses and positive forms of self-sacrifice. In Sacred Pain an affirmative surrender of the ego is illustrated through the case of a Lakota man suffering from a number of problems, including depression. After his experience with chest piercings at a Sundance ceremony the man said, “I felt pain, but I also felt that closeness with the Creator.” It’s not just the sensation of being flogged I find erotic; rather, it’s the state of mind it evokes: subdued, vulnerable, and ready to be taken advantage of. I tell myself it's not because I'm a neurotic that I want to be beaten, or because I have low self-esteem and think I deserve it, but because I aspire to a higher plane of consciousness. A type of spiritual catharsis, even truer for me in the etymological sense of the word—the relief of anxiety by bringing repressed feelings to consciousness.

My boyfriend handed me my clothes when I walked off the stage. “You wanna go have a smoke?” I asked.

We went out onto the stairwell. My legs were stiff and my ass excruciatingly numb. The night air was cool on my shoulders. Cool, then cold. I started to shake. Then, midway through a sentence, I began to see stars; a blanket of grey sparkles descended on me. I sat on my numb ass and the cigarette tumbled from my fingers.

I’d never fainted before in my life.

My boyfriend found me a corner inside, in an unoccupied stairwell, concealed by a curtain. It was somewhere to hide. I ripped off my corset, angrily tore off my shoes. Now any restraint on my body—anything against my flesh—felt like an assault.

He held my hand and didn’t let go.

Now, two days later, as we argue in the kitchen, I explain, “You don’t understand what those endorphins do to you when they’re released. You have no idea the high.”

When I worked the streets I was attacked by a stranger. I imagine I felt fear when he covered my mouth with his fist. The texture of his fingers, the way my lips were forced open, I could taste him. What? Why didn’t I bite down? Why didn’t I crush my cigarette in his face? I watched the spire of smoke, a useless red ember glowing from the corner of my eye. I use the word “imagine” because I can’t quite remember. Only the details.

Is my fear of him being released only now, latently, when I experience pain in a comfortable, nurturing setting?

Thus in the sixth century Saint Radegund practised self-injurious behaviour as a way of controlling terrible childhood memories of her family's murder. Although many saints like her would today receive a diagnosis of schizophrenia or hysteria, many of them did use masochism as an effective technology against painful pasts.

Part of me feels guilty after flogging my tension into submission, like that drinker again who wonders, maybe, deep down, if she isn’t making her problems worse.

I know that pain is a broad category and that within religious ritual it is a taboo subject. Despite this, rituals involving pain are universal. And yes, I wonder if both spirituality and masochism can’t be understood as flights from the self in search of love.

My daughters glimpse my bruises by accident. I explain they came from a tumble down the stairs wearing high-heeled shoes: I turn it into a cautionary tale to be heeded when they are playing dress-up at home. Three weeks later and my ass still hurts but the deep violet stains have faded away and what’s left has drained from my rear and sort of pooled in my thighs like stocking seams. But the pain is still there, deep in my tissue, buried, like something almost invisible from the outside. »