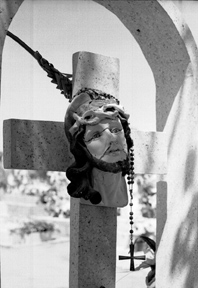 I met him in college, no
not really a meeting. There
was a phone call on the dormitory phone
and I answered. No idea what was being said
from the other side. It was in a tongue
so thick with accent that I couldn’t get it. But
Rodriguez came across, and a list
of room numbers and names
posted next to the phone delivered the message.
“Jesus!” I yelled. “There’s a phone call
for Jesus!” And to the three guys in sweats,
“It’s for Jesus. Do you know where he is?”
“Rodriguez?” said another guy coming up
from the stairway. “Yes. I just saw him
on the road. His name is Hay-sus, Hay-sus
Rodriguez. Don’t call him Jesus.” “Okay,” I said.
“I’ll leave a note on his door to call his mother.”
“Mary,” another guy said. “I believe
his mother’s name is Mary?”
I taped a note on the outside of his door: “Jesus,
call home.”


Photo by George Omorean
From Issue #51.